Zyxel switch solutions offer premium equipments with high reliability and performance by profound knowledge in telco-class equipments. The Zyxel switch solutions have mission-oriented design and a complete product portfolio to offer the best-fit solutions for customers. The solutions meet not only SB and SMB needs, but also requirements of different vertical markets.

Deliver your data swiftly to your client devices from your NAS or other core networking essential with 10 Gigabit SFP+. Connect the latest 802.11ax access points to the 2.5 Gigabit ports for true maximum wireless speed delivery.It has been designed specifically for customers who require an affordable 10GbE network connectivity over a variety of mixed environments from the home to the office.

Zyxel introduces the GS1300 Series switches specialized in surveillance deployments. With a brand-new titanium grey exterior purpose-built for surveillance, the Series includes 3 models with a range of large power budgets from 130 W to 250 W. The GS1300 Series comes with specialized hardware features such as an extended range mode for long rangeapplications along with PoE LEDs for real-time status inspection. 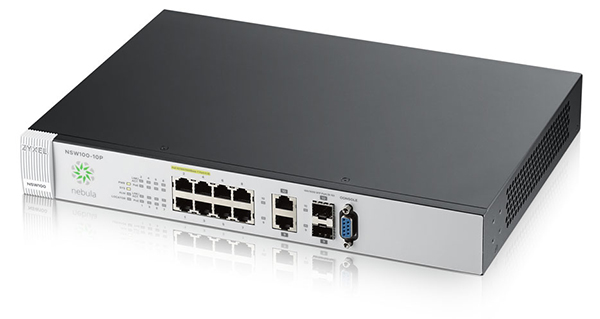 The Zyxel Nebula NSW100 Series Cloud Managed Switches provide Layer-2 Gigabit access switching with 8/24-port PoE and non-PoE models. The PoE models support 802.3at PoE Plus standards to provide a 180/375-watt highpower budget. Every Nebula switch is designed to be managed completely from the Nebula Control Center. The cloud-based management interface provides site-wide configuration and monitoring of all ports, which allows multiple switches to be configured at the same time with a single click over the Web. 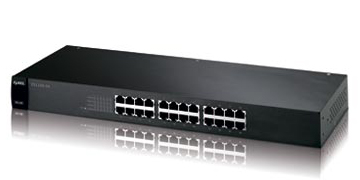 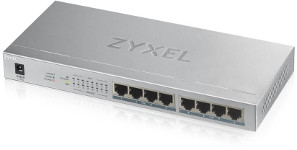 The Zyxel GS1005HP/GS1008HP GbE Unmanaged PoE Switch is equipped with 5 or 8 Gigabit Ethernet ports, 4 of which are PoE ports that can deliver up to 60 w of total PoE budget. The GS1005HP/1008HP can easily connect with PoE ready devices to your network with plug-and-play design and provides power-saving benefits without compromising performance. 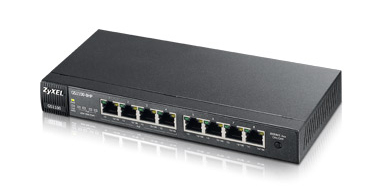 Zyxel introduces the GS1300 Series switches specialized in surveillance deployments. With a brand-new titanium grey exterior purpose-built for surveillance, the Series includes 3 models with a range of large power budgets from 130 W to 250 W. The GS1300 Series comes with specialized hardware features such as an extended range mode for long rangeapplications along with PoE LEDs for real-time status inspection. 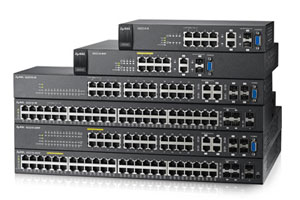 The Zyxel GS2210 Series are fully featured Layer 2 Gigabit access switches designed to meet these converged data, video and voice networking challenges. The Series comes in 8-, 24- and 48-port models with a combination of GbE RJ-45, GbE SFP and GbE combo (RJ-45/SFP) connectivity. The PoE models comply with the IEEE 802.3af PoE and 802.3at PoE Plus standards and provide a high PoE power budget. With rich traffic shaping, network isolation, and security features, the GS2210 Series is the perfect L2 access switch solution for converged data, video and voice networking. 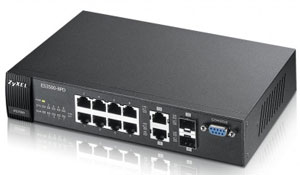 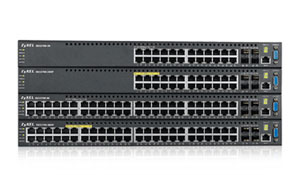 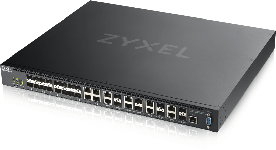 Designed for SMB with 10GBASE-T connectivity and advanced L2+/L3 lite features, the new Zyxel 10-Gigabit L2+ managed switch XS3800-28 enables applications for aggregation or SMB core switching and connection; and the XS3800-28 also comes with up to 12 Multi-Gigabit ports to help your preparation for network expansions with Multi-Gigabit capable devices such as servers, workstations and NAS. 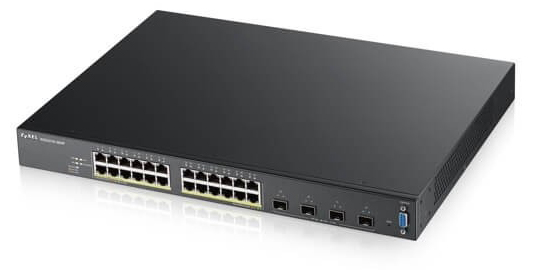 The XGS2210 series is a cost effective 10G uplink port switch with SFP+ 10G Fiber connection support meant to increase core and interserver capacity. With the increase in data rates from 11ac wireless, core traffic is increased to 10G to prevent bottlenecking at the switch. Whereas in the past 10G uplinks and ports have been too expensive to utilize frequently, the XGS2210 series is now a highly affordable and cost effective way for SMBs to upgrade to 10G between virtualized servers, backups, and between switches.

The Zyxel GS1200-5HP/GS1200-8HP Web Managed PoE Gigabit Switch is more than just a typical PoE switch. It comes with an easy-to-use Web configuration to prioritize, limit and/or protect network traffics. It has been designed specifically for customers who require simple control functions for office network management. 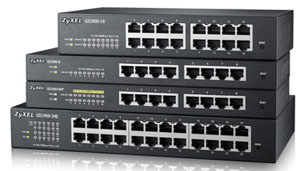 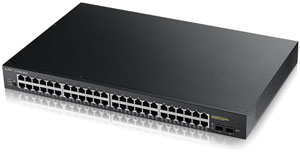 Today’s small and medium-sized businesses (SMBs) expect a higher level of performance from their networks—more connections to support diverse applications, fewer network disruptions, easier management and a greater degree of network security. The Zyxel GS1920 Series of switches fulfills these expectations with support for 24/48 100/1000BASE-T PoE Plus or non-PoE copper ports, as well as non-blocking performance and high-power budget support to facilitate a greater number of network connections. 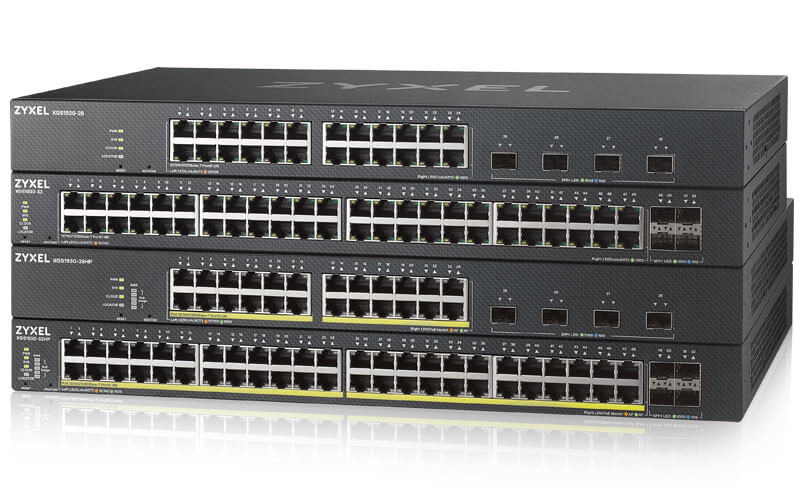 The Zyxel XGS1930 Smart Managed Switch Series introduces Zyxel NebulaFlex™ that allows you to easily switch between standalone and our license-free Nebula cloud management platform anytime with just a few simple clicks. The NebulaFlex™ protects your investment on wired technology by offering the flexibility to transition to the cloud in your own time, without worrying about additional ongoing licensing costs. Prudent spender organizations can take advantage of Nebula to centrally manage and access real-time network information to have effortless control over the XGS1930 Smart Managed switches and other Hybrid and Nebula devices – all under a single intuitive platform without the need to install any software. 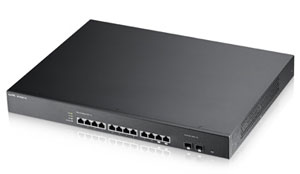 Zyxel designed its next-generation 10GbE L2+ Managed Switch—the XS3700-24—for unmatched resilience and non-blocking performance in server virtualization, as well as managing Gigabit traffic from the network edge. The XS1920-12 & XS3700-24 are not only capable of providing a complete array of L2+features; they also handle basic layer-3 routing. This includes both static route and policy routes to ensure flexible deployments and uninterrupted network availability. The XS3700-24’s redundancy support for both its hardware and software makes it the ideal enterprise-grade 10GbE backbone. 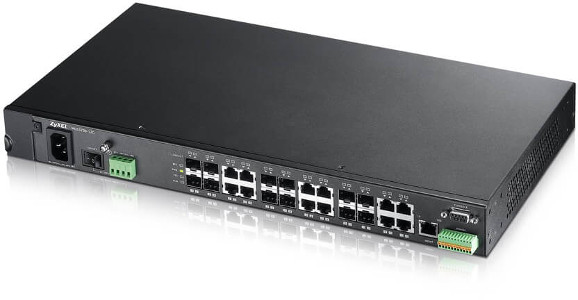 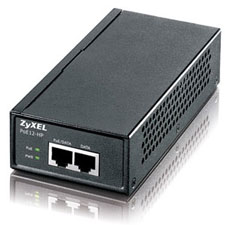 The Zyxel PoE12 Series is a PoE injector designed to support the increasing power demands of the latest-generation N wireless Access Points (APs) as well as the pan, tilt or zoom functions of IP surveillance cameras. The PoE12 Series consists of two models: PoE-12 and PoE12-HP. The PoE-12 and PoE12-HP are single-port PoE injectors that deliver both power and data to other PoE devices via a single CAT-5 Ethernet cable without extra power supply. The PoE-12 enables 100 Mbps data transmissions and provides power up to 15.4 W, while the PoE12-HP allows data transmitted at 1000 Mbps and delivers power up to 30 W. 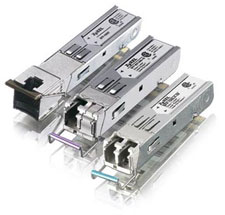